Our campaign budget has been cut. Our staff has been reduced. We are in line with the post-COVID company plan. Now what? As marketers, how can we optimize our time to help our company accelerate through this new economic context?

To discuss the question, I brought in Stage 2 Capital LP and former CMO at software unicorns Rapid7 and LogMeIn, Carol Meyers. During Carol’s 8 year tenure at Rapid7, the company grew from less than $30M to $339M in ARR and she built a global marketing team of over 100 people including BDRs. Carol is currently an advisor to a number of early stage ventures. She has two tactics she’s used in her career during these times. Have a listen. She is quite dynamic. A summary is as follows. First, Carol reminds us there is a 99% chance that one day our CEO will be back in our office saying, “Great news! The board just approved our “growth plan” budget. Can you send me a recommendation on how much we should expand the marketing budget and how you will deploy that capital?” Carol urges us that now is the time to develop that plan. In startup world, every second counts. It would be a shame if we had to delay growth execution by a few days in order to work on the CEO’s inevitable question.

The assembly of the plan doesn’t mean simply leaning into the channels and messages that worked in the past. The buyer and market has shifted. Carol advises a series of test/learn/iterate sequences to optimize the plan for the times. She encourages that now is a great time to explore messaging against new verticals or new mediums that you didn’t have time for in the past. A small amount of funds can go a long way on the learning front.

I saw some great examples of this type of testing and analysis from marketing teams when the economic uncertainty began back in March.  An analysis that stands out to me was conducted by the marketing team at Stage 2 Capital portfolio company Enboarder led by VP of Marketing, Sarah Pern. The email is below.  We can imagine how useful these insights are useful far beyond marketing as the organization evaluates pivots in messaging, SDR geographic focus, and top line forecasts.

We have been keeping a closer eye on the top of the funnel during this time and I thought I would highlight some findings so far.

My plan is that if 'onboarding' as a use case isn't driving new business, we'll have to pivot the messaging and go to market as something quite different overall. Hence the new campaign test for 'remote onboarding' and 'remote employee experience'. However, we are still in the very early days.

Unfortunately, we have seen something a little scary over the past couple of weeks.... Our Adwords cost per conversion (from click to demo booking) has increased by 32% in the past 14 days. This may seem granular, but the majority of our opps come from here and I wanted to share any early indications with you.

We saw 20% less searches and clicks for our current onboarding keywords.

This shows that for now at least, there is a little less demand in the market.

We're also paying more per click and per conversion

This may indicate slightly less urgency from those researching onboarding solutions to actually wanting to talk to sales.

I have no answers for this. Seems odd given Australia has had the least impact from COVID-19 overall.

However, we're still on track for opps this month, but the issue may present itself over the next 2 weeks

Reduced budget isn't a factor yet

I'll be sure to keep you updated.

Thank you and have a wonderful and well deserved weekend - I'm off for a beer!

Carol’s second area of marketing team focus is re-examining buyer journey and buyer persona research. We have yet to come across a buyer that has the same sentiment and priorities they had back in January. Carol urges us that these critical GTM assets need to be re-discovered and marketing should take the lead on it. She advises us to get back in touch with customers to dive into their perspectives. Reflect on messaging experiment results and how they should drive your buyer persona (re)definitions.

For tactical guidance, a buyer journey framework using prop-tech unicorn, VTS, as an example is shown below1. 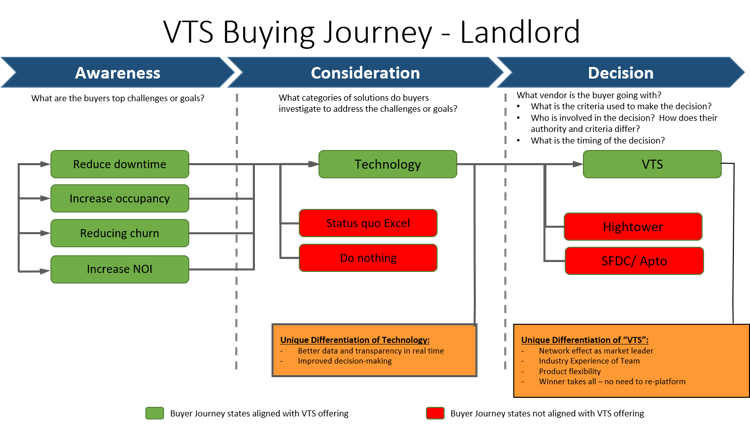 Thanks Carol for your insights on how to focus our time. What other priorities are people pursuing?